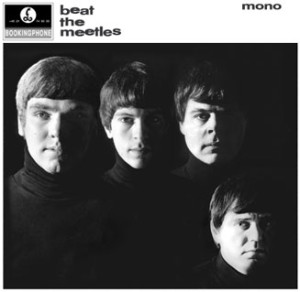 It was during the summer of ’84, that 14-year singer/guitarist Søren saw an advert in a music store in Naestved, the neighbour town to Søren’s own hometown, Vordingborg. A guy was looking for musicians for starting up a Beatles tribute band. Søren, crazy about The Beatles, and already at that time well into George Harrisons guitar playing, took the phone number and called the guy a few days later. Unfortunately it turned out the guy had just gone to India to take some sitar lessons. His mum said he would be back in a few months. Søren lost the phone number and after some time, busy with other things, forgot about the advert.

Ten years later, in 1994, Søren, now living in Copenhagen and lead singer/guitarist and songwriter with his own band Flow, was checking the musicians wanted adverts in a Danish paper for curiosity reasons and suddenly stumbled over an advert. The add read something like; “Route 66 – 60s covers/Beatles tribute band seeking George Harrison-style-guitarist with McCartney-like-tenor voice”. Still with the dream of paying a tribute to the fab four, Søren called the band. A few weeks later he met up with singer/bassist Niels Wulff and singer/guitarist Michael Stanley in the band’s rehearsal room. They went through I Saw Her Standing There, Day Tripper and Can’t Buy Me Love. Talking afterwards it became clear that Michael Stanley was the exact guy whose advert Søren had reflected on ten years earlier. After a cup of tea they split up, but decided to talk in a few days. It was clear for all involved that they really had something in common. At this time Route 66 had been together for about 7 years with Stanley and Wulff with, among others, drummer Per Mousing doing a repertoire of varied 60s stuff, for instance The Beatles, The Rolling Stones and The Byrds. Søren joined them on the condition that the band concentrated 100% on The Beatles. The boys agreed and the rehearsals could begin. So during the long hot summer of 1994, the band, who had by now changed it’s name to Beat The Meetles, spend long days inside a gear packed, sweaty rehearsal room with no ventilation and only 13 square meters of floor space, going through every little nuance of about 25 early Beatles songs.

Beat The Meetles played the first gig at 60s venue “Woodstock”, Copenhagen, September 1, ’94, for an invited audience of Beatles enthusiasts. At this stage Beat The Meetles concentrated mainly on songs from the early Beatles repertoire with all members of the band dressed up in collar-less Beatles costumes and high-heeled Beatles boots. The instruments were similar to those used by The Beatles, i.e. Rickenbackers, Gretsch Tennesean, Höfner violin-bass, VOX valve amplifiers and Ludwig drums.
In Summer 1995 Beat The Meetles added keyboards, handled by Stanley and Koch and launched a new show, containing songs from the later period 1967-1970 including material from Sgt. Peppers Lonely Hearts Club Band and Abbey Road. For this part of the show Beat The Meetles were seen in “real” Sgt. Pepper uniforms, especially created by the Danish Costume Fabric.

This addition to the show led to numerous TV performances, for instance Danish TV2 and several other TV stations during spring ’97. A highlight from one of these TV appearances shows the band performing Norwegian Wood with rhythm guitarist and singer Michael Stanley playing a real Sitar. Later this year, Jens Svane took the over the drum stool from Per Mousing. In September ’98, Europe’s biggest Beatles fan magazine, Beatles Unlimited Magazine, printed an article about the band, containing a review of the bands demo material and a live performance, judging the band as “perfect soundalikes”. This led to several enquiries from Beatles enthusiasts around the world. In Spring 2001 the drum stool was vacant again, leading to the Beatles inspired drummer Flemming Koch took over. In August 2001 Beat The Meetles went on tour to England to perform e.g. at the famous “Cavern Club” in Liverpool.
With a fantastic tenor vocal and instrumentation both on bass and guitar Magnus von Bülow took over the demanding Paul McCartney role from Niels Wulff in spring 2002.
Since the very beginning Beat The Meetles has performed on literally every live stage in Denmark, with several tours of Scandinavia and England. To list the many hundred gigs the band have played would be impossible but one could mention; Vega, Copenhagen; Stars, Vordingborg; Fermaten, Herning; Pitstop, Kolding; Loppen, Copenhagen; Dojan, Gothenburg as well as several Danish festivals.
Midtfyns Festival, Ringe, Danmark, July 4, 2003.
A new one-set show is released including Beatles “Live” 1963-1966 and “The Beatles in the Studio” 1967-1970, a.o. with the highlights, Paul’s “Yesterday” and John’s “Come Together”.